Morgan and I met for coffee at the Roosevelt Coffeehouse, Tuesday, December 26. 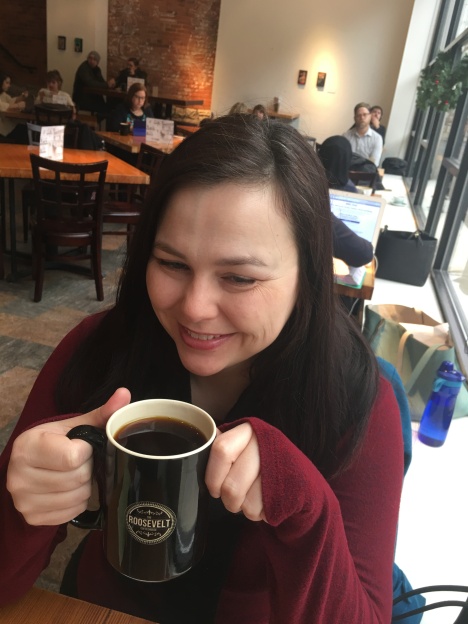 She’s the first information architect I’ve had the pleasure to speak with, and in describing her skills and the activities of her work for her consumers, I got schooled on terms such as “digital design experience” and “UX,” or “user experience.” She’s self-taught, having organically moved from a career as a reporter for a weekly newspaper to designing lay-out for print features, thanks to the Adobe InDesign she learned in high school. PRO TIP: Take advantage of the opportunities to pick up skills. In Morgan’s case she developed applicable tools that transfer from print to digital platforms. She aptly described the development of a website analogous to a carpenter building a house. I got better-informed over a cup o’ joe.

Morgan makes it clear her #1 VALUE is Honesty. “We cannot realize integrity, communication, or morals without honesty” as the foundation.

As a PERSONAL MISSION, to “give back.” She experienced the lift and support she needed as a child from a few people who reached out and gave her help and “I want to reach out and help in the same way.”

I was randomly inspired to add an odd question during these interviews, i.e., EARLIEST MEMORY/WHAT AGE? Her memory remains keen on details, how she was dressed, sliding off her dad’s lap, and hearing his hearty laughter. She also clearly recalls her first day of school.

HOW DOES YOUR CONNECTIVITY WITH ANOTHER HUMAN FEEL? This offered a preview of our later conversation regarding emotions. For Morgan, this feeling of a strong connection with others is like a “safety net.”

Along the SCARCITY/ABUNDANCE spectrum, she’s financially abundant, but somewhere in the middle socially. She has amazing close friends but feels the need to get out there and associate more with people.

The BOX we’re often encouraged to THINK OUTSIDE OF: “By acknowledging that there’s a box at all is to put limitations” on life; limitations are Morgan’s box.

WHERE DO YOUR IDEAS ORIGINATE? “My muse is really just human interaction, people-watching. There are so many stories out there.” Her blog site has been dormant, but she intends to resume blogging.

UNCERTAINTY:  When faced with the unknown, “I organize. The world is a chaotic place, so I control my personal space.” She even has a suitcase packed in the event she should suddenly pick up and go, and is often helpful with friends to declutter and organize. This activity grounds her when work seems stressful or relationships get chaotic.

WHAT ARE YOU DOING TO CREATE CHANGE? “I want to find a new form of communication.” We have an natural  confirmation bias, to read/hear/converse about ideas that we already have set upon. But what if we create our own doubt, a la the Socratic Method. People need to change their own mind, with rigorous critical thinking.

“We’re not rational thinkers” when it comes to making decisions. Here, as she references THINKING FAST AND SLOW by Daniel Kahneman, Morgan offers the  comparison of people to elephants and riders of the elephants. Simon Sinek touches on this same subject in his STARTS WITH WHY. In Kahneman’s model, the Elephant is the Cause, the emotional feel of making a choice, and the Rider is the Process of cognitive analysis, given a choice. Through observation of the US political campaigns in 2016, Morgan knew who would win the election even before the candidates were nominated.

MORGAN IN 5-YEARS: She “re-invents herself” every five years, i.e., a reporter, digital designer, stand-up comic. But Columbus, Morgan envisions “another Baltimore,” referencing the riots that city experienced in 2015. Columbus ranks #2 in US in “economic segregation,” and she suspects the pressures in our neglected neighborhoods will increase to the point of disruption. And the US/world? “The recent decision of net neutrality must be reversed, for the sake of freedom of speech and the future of our democracy.”

Thank you for an informative and inspiring encounter, Morgan.

And THANK YOU, readers, for clicking on to these “CAFFEINE COMMUNIONS.”
Please add your comments in the box below; any review or critique is welcome.
Let me know if I may interview you, in the box below or directly to me at jim1coe@gmail.com or (614) 440-1445.
And don’t miss a single interview, by clicking the “Email Subscription” box up top.

We are, I believe, and everything is, in perpetual unfolding/enfolding/evolving. By surface appearances, we're in turmoil and fearfullness, but in fact our existence is on the edge of a new way, beyond the US versus THEM we have grown with. I encourage you to join me over coffee or tea in face-to-face encounters. I call this exercise, "CAFFEINE COMMUNION: Encounters with Paradigm Pioneers." I'm a Columbus, Ohio husband, father and citizen. I practice string band sounds from the ridges of Pocahontas County, West Virginia, the vortex of the ancient drone.
View all posts by orangeacorn →
This entry was posted in CAFFEINE COMMUNION: Encounters With Paradigm Pioneers, Leadership thru Trust, Local Community, Occupy Columbus, Possitivity: Work for Progress, Self Improvement, Uncategorized and tagged Columbus Ohio, confirmation bias, Daniel Kahneman, economic segregation, Jim Coe, Jim Coe Columbus Ohio, Morgan Landis, Roosevelt Coffeehouse, Simon Sinek, Socratic Method, THINKING FAST AND SLOW. Bookmark the permalink.

This site uses Akismet to reduce spam. Learn how your comment data is processed.