#40 in this series of CAFFEINE COMMUNION interviews.

Chet suggested we meet at Bottoms Up Coffee Co-op in Franklinton, which was an agreeable opportunity to see Virginia & Josh, the owner/operators of this socially-conscious caffeine corner and co-work center with spaces for rent. We did this March 30, 2018. 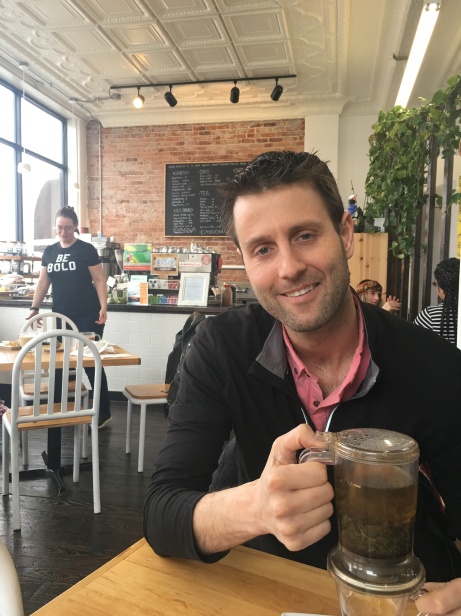 Neither of us can remember specifically when we met, circa 2012, when he served as the Administrator of the Short North Civic Association. It could have been at the annual Goodale Park Summer Music series, or at a WCBE 90.5FM event, or perhaps Earth Day. In any event, it was before Chet joined Car2Go as Marketing Director in 2013. He is currently the general manager of our local fleet of vehicle-sharing smart cars ( 206 automobiles with a share-range of 25 square miles within the core of Columbus, serving over 29,000 members). FULL DISCLOSURE: I am an enthusiastic member.

When you see Chet, ask him to tell you about them.

CORE VALUES:  Chet prioritizes his sense of family as foremost. He’s the oldest of three, and they gather at a Mexican restaurant every Saturday for dinner. He wears a dogtag around his neck with his parents’ and siblings’ names stamped on, and he credits them for inspiring and encouraging his values. “They’re my rock.” And, “my sense of equality is a huge value.” His work with Equality Ohio and the LGTBQ movement is “my generation’s civil rights issue.”

Current mission to EFFECT CHANGE: As a goal Chet set when he outlined his “Project Trece” in 2011-2012, his Goal #7 was “To engage, participate in and better my local community (Short North).” This starts with his particular block, west of Neil. Although he doesn’t technically reside within the Harrison West Society, he’s a member, representing “Harrison East.” Inspired by the last Big Table community conversations, as launched by the Columbus Foundation, he pledged to “connect to support his immediate community,” so he teams with neighbors with a block talk, “Wilber Wednesdays.” He’s now engaged in the current class of Leadership Columbus. A   project with his team of seven is coordinating with Columbus Foundation as a beta for a more expansive “BlockTalk.” Career-wise, Chet is effecting change, as his lead at Car2Go has tasked him to help weave the company into the “Cultural Fabric of Columbus.”

EARLIEST MEMORY: Playing with his sister and tunneling in deep snow as a child in Rapid City, SD.

Chet’s FEELING of HUMAN CONNECTEDNESS: “Complete comfort, confidence and trust with someone close, allowing to be real, honest, accepted.”

His presence on the spectrum of SCARCITY/ABUNDANCE? “I couldn’t be more grateful for the abundance in my life, my family, my friends…I’m the richest man in the world, if you measure wealth by the quality of friends.” Chet regards his church as his weekly dinners with his family.

Chet’s proverbial “BOX” that we’re often encouraged to THINK OUTSIDE OF: His box is “allowing life to happen,” and when he steps outside this constraint he’s empowered to “make life happen, to make his own decisions.”

Chet’s source of IDEAS, his MUSE: “Hero movies…Brave Heart, Top Gun, Dead Poets Society.” As he recalled the effect of that last film mentioned, Chet recited a passage of Walt Whitman’s elegy to the slain Lincoln…

“O Captain! my Captain! our fearful trip is done,
The ship has weather’d every rack, the prize we sought is won,
The port is near, the bells I hear, the people all exulting,
While follow eyes the steady keel, the vessel grim and daring;
But O heart! heart! heart!
O the bleeding drops of red,
Where on the deck my Captain lies,
Fallen cold and dead.”

He continues to tell me his MUSE is his desire to make a positive impact.

On UNCERTAINTY: “Control the controllables, cherish the time you have, tomorrow is not promised.”

Henceforth 5-YEARS ahead, 2023: Chet believes that advances in technology will connect people digitally but disconnect us personally. He hopes for a shift, a movement to focus more on face-to-face interactions. He pleased to anticipate the advances in transportation, notably with the Smart City application Columbus is developing.

ANCESTORS: Chet can name his great-grandparents; Harvey and Gertrude Ridenour migrated to US from Europe.

Thank You, Chet, for your time and interview.
HOW ABOUT YOU?
Let’s schedule a meeting, SOON, to get acquainted and conduct your interview for “CAFFEINE COMMUNION: Encounters with Paradigm Pioneers.”
Reach me with email at jim1coe@gmail.com
or text/phone (614) 440-1445.
Please add your comments in the box below; any review or critique is welcome.

We are, I believe, and everything is, in perpetual unfolding/enfolding/evolving. By surface appearances, we're in turmoil and fearfullness, but in fact our existence is on the edge of a new way, beyond the US versus THEM we have grown with. I encourage you to join me over coffee or tea in face-to-face encounters. I call this exercise, "CAFFEINE COMMUNION: Encounters with Paradigm Pioneers." I'm a Columbus, Ohio husband, father and citizen. I practice string band sounds from the ridges of Pocahontas County, West Virginia, the vortex of the ancient drone.
View all posts by orangeacorn →
This entry was posted in CAFFEINE COMMUNION: Encounters With Paradigm Pioneers, Leadership thru Trust, Local Community, Occupy Columbus, Orange Acorn, Possitivity: Work for Progress, Self Improvement and tagged Big Table, Blue Zones, Bottoms Up Coffee Co-op, CAFFEINE COMMUNION: Encounters With Paradigm Pioneers, Car2Go, Chet Ridenour, Columbus Foundation, Columbus Ohio, Equality Ohio, Goodale Park Summer Music Series, Harrison West Society, Jim Coe, Jim Coe Columbus Ohio, Leadership Columbus, Oh Captain My Captain, Orange Acorn, Short North Civic Association, WCBE 90.5 FM. Bookmark the permalink.

This site uses Akismet to reduce spam. Learn how your comment data is processed.